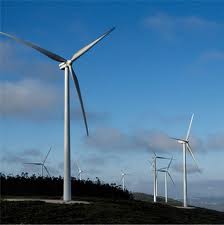 On Tuesday the DOE said that it has offered a $135.76 million loan guarantee for a wind farm in New Hampshire.
The wind power developer, Noble Environmental Power, plans to use the funds to build a 99 MW Granite Reliable Power Windpark located about 110 miles north of Concord. The developer will get the loan from WestLB, the lender who applied for the loan guarantee under the Financial Institution Partnership Program, which is part of a DOE loan guarantee program that helps projects with mature technologies line up financing.
Noble plans to use Vestas Wind Systems' V90 3.0MW wind turbines, which have been used in projects in other parts of the world but in only one project in the U.S. Utilities Central Vermont Public Service and Green Mountain Power plan to buy most of the power from the wind farm. Noble doesn't plan to be the majority owner of the windpark, however, and the company announced last December that it planned to sell the majority stake to Brookfield Renewable Power.
Through the loan guarantee program, the DOE promises to repay the loans if borrowers can't. The program is part of the stimulus package passed in 2009 to help create jobs and rescue a faltering economy. It's set to end on Sept. 30 this year.
The wind farm is the fourth that has gotten a loan guarantee offer. The other three are the 30MW Kahuku Wind Power project in Hawaii, 845MW by Caithness Shepherds Flat project in Oregon and the 50.6MW Record Hill Wind project in Maine.
The DOE also has a $16 million loan guarantee to Nordic Windpower to build a wind turbine factory in Idaho. Overall, the DOE has offered $1.67 billion in loan guarantees to the five wind projects (including Noble's project).